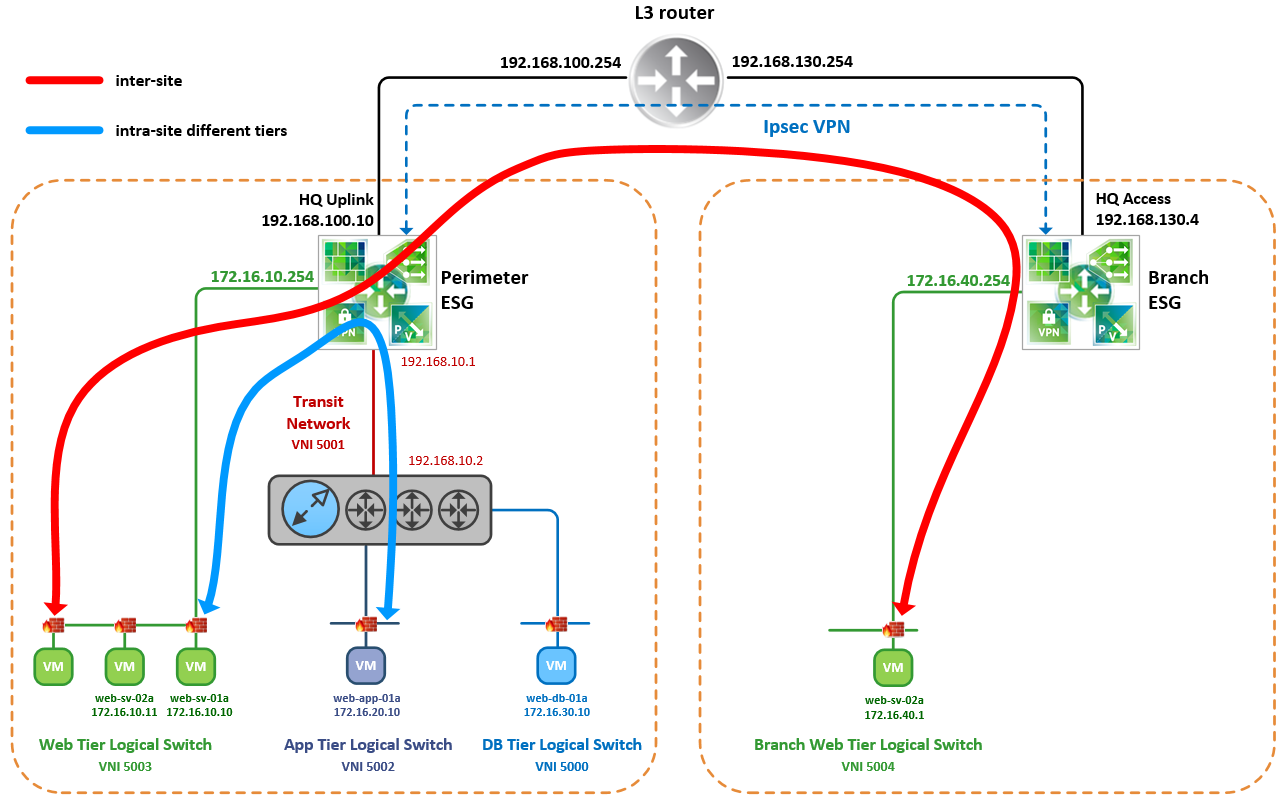 IPsec VPN offers site-to-site connectivity between an NSX Edge instance and remote sites, in my examples HQ and Branch.
Other use cases for IPsec VPN other than Remote/Branch office are Cloud on-boarding and Cloud to Corporate.
Up to 64 tunnels are supported and a maximum of 10 sites can be configured. Dynamic routing protocols are not supported between NSX Edges and remote VPN routers. In the following scenario, the Perimeter ESG is configured as an IPsec endpoint exposing the distributed logical switches (Web, App, DB) subnets, reachable via the Transit network.
The networks that are exposed by an IPsec tunnel endpoint must either be directly-connected or subnets reachable through static routing (again dynamic routing protocols are not supported).

*** UPDATE 17/11/2016 ***
Following some discussion with my  Xtravirt colleague Richard Renardson, testing has been done to prove that dynamic routing protocols work between the dLR and the ESG; the limitation only applies between the VPN endpoints (ESGs). In addition, after consulting internally with VMware confirmation arrived from Ray Budavari stating that the documentation given during the NSX ICM classes are misleading and dynamic routing protocols are indeed supported between dLR and ESGs. I’d like therefore to thank both Richard and the VMware team 🙂

A similar configuration is required on the Branch ESG, settings will be the other way around.

It’s worth mentioning the auto-generated firewall rules that you will find:

My NSX lab is nested hence I have configured the AES as encryption algorithm. However, in a real production enviroment you would want to use hardware that support AES-NI (AES New Encryption Instruction Set by Intel).
NSX Edges will offload the AES encryption to the hardware on supported Intel Xeon and second-generation Intel Core processors. Up to 40% performance increase can be obtained. No user configuration would however be necessary as AES-NI support in hardware is autodetected.

This site uses Akismet to reduce spam. Learn how your comment data is processed.

We use cookies to ensure that we give you the best experience on our website. If you continue to use this site we will assume that you are happy with it.OkPrivacy policy